Oxide dispersion strengthened ferritic/martensitic steels are candidate materials for structural components in fusion reactors for their improved mechanical properties, higher operating temperatures, resistance to swelling and hydrogen embritlement over austenitic steels. However, the detailed behaviour of microstructural features and grain boundaries in the ODS alloys is still unclear. Current APT work being carried out in the group includes the analysis of the nanoparticle dispersion in a series of ODS Fe-14Cr alloys:

Distribution of Y, YO and CrO ions in an ODS Fe-14Cr alloy

These materials are being submitted to ion irradiation experiments. It is important to characterize the nanoparticle dispersion before and after them in order to identify irradiation-induced changes in their microstructure which may affect the mechanical properties of these materials. The image below shows a large oxide particle embedded in a iron matrix. This is a 2D slice of a 3D Fe-ion density map, the expected density is 30/30/nm3 or light green in colour. There are several deviations from this expected density which arise from the evaporation behaviour of the sample and the assumptions used to create the 3D reconstruction. Most notably there is a high density region followed by a low one at the plane of the grain boundary (shown at the top of the image) and a significant high density region above and surrounding the oxide particle. Low index poles in the matrix can also been see as variations in the bulk density. Understanding the effects that cause these artefacts is critical to accessing the accuracy of atom probe reconstructions and particle analysis. 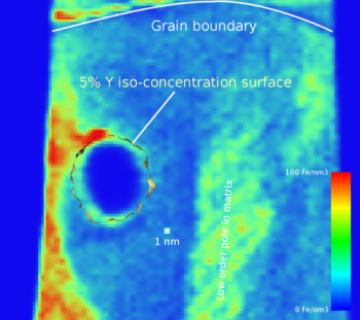 W and its Alloys

In a fusion reactor, the diverter plays a critical role of filtering our helium ash from the continuous deuterium-tritium fusion reaction. At the same time, it is the component that will undergo the greatest contact with the plasma and therefore will need to withstand extreme operating temperatures of 1000oC as well as dual bombardment of neutrons and helium. Currently, tungsten is the primary material candidate for the divertor because it is capable of surviving these conditions whilst retaining minimal amount of radioactive tritium. A further complication is that transmutation will occur, turning the W into a W-Re alloy (and subsequently W-Re-Os), while it will also form non-equilibrium clusters/brittle phases under irradiation. Such phenomena are of great interest for fusion reactors because they must be understood to predict and subsequently control divertor lifetimes. APT is the best-suited technique for studying such clusters and the work conducted at Oxford investigates the mechanisms behind formation of such features within a range of alloys and irradiation conditions. 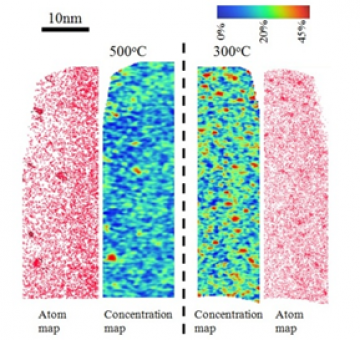